The Home of Seito Shito-Ryu Karate-Do In Australia 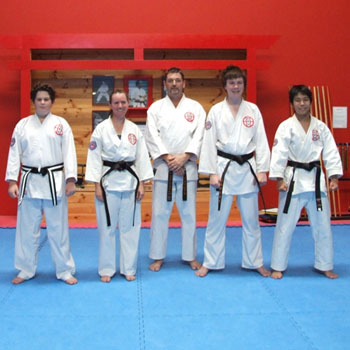 Our new Black Belts with Mike Shihan after the grading

On Saturday March 26 a Black Belt Grading was held at Williams Family Karate Academy with 3 candidates attempting the rigorous grading for Shodan and one junior candidate attempting the grading for Shodan-Ho.The grading was challenging both physically and mentally and all candidates showed excellent focus and spirit. Jason was awarded Shodan-Ho (provisional Black Belt), Sally, Taiga and Haiden were  awarded the rank of Shodan (1st Degree Black Belt) by Mike Williams Shihan.

Jason joined the Academy at aged 5 and has trained hard for 8 years to achive his current rank which is a fantastic effort! Haiden was also a young starter and trained for 7 years to reach his goal of Shodan which is another great example of dedicated training. Sally and Taiga trained for 5 and 4 years respectively to reach the Shodan level. Well done to you all!

Oops, you forgot something.

The words you entered did not match the given text. Please try again.